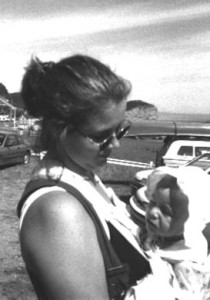 Yesterday, a Facebook friend and mom of a child with Cri du chat syndrome posted an “incident” that happened with a religious nut case earlier that day…..

I am sure I would have lost my cool….

That made me think of moments where I could have lost my cool. One of my favorite was with a doctor back when Emily was just over 2.

To give those of you who don’t personally know us some perspective… I moved out of my mom’s house at 17 to go to college approximately 1000 km away. When settling down after my studies, I added another 200km to the distance and moved to the Laurentians. For those calculating distances in miles, it took us 12 hours or so to get to my mom’s house. No flying there, we had to drive.

I met my now husband when living in the Laurentians and his family was in Ontario…. Several hours drive to the West…. My mom was East…

Before Emily, we would take vacations apart so he could visit his family while I visited mine and we still had vacation time left to spend together.

After Emily, the 3 of us became a unit, we traveled together to visit our families.

Back to the summer when Emily was 2, we packed our mini-van and drove to my mom’s house. We spent time there and drove back to our house, picked the mail, did laundry and planned to drive to my in-laws the next day.

It is really hard (pun intended) to see your baby in pain!

That summer, between those 2 trips we knew Emily was in pain and before hitting the road again, we decided to take her to the off-patient clinic to be sure it wasn’t worst than usual.

After looking at Emily’s tummy and noticing that she was full of air and poop, he asked us what we were up to. I explained we were in between trips and just wanted to be sure Emily was ok to travel.

His reply was: “Maybe your daughter needs stability in her life…”

Jon took Emily to get her dress and moved her as far away from the doctor and I as he could. He knew that this little jab wasn’t going to go over well with me.

I looked at that “generalist” doctor… and said “excuse me?” He actually repeated it….

I had to fight the urge to be mean and impolite…. My mom raised me to be polite and respectful of my elders and of the professionals I would encounter in my life…. Thank you mom!

As I was slowly breathing in and out I looked at that doctor and told him that we would consider is insightful comment and pass it along to….? Who should we pass it along to? Emily had a urologist, a cardiologist, a neurologist, a pediatric surgeon,an ENT, a gastroenterologist, a dietician, many therapist and more doctors ending in “ist”. If he could let me know which one I should take his “generalist” comments to I would gladly do it… By that time, my smile was no longer genuine of course and that doctor was looking at me as if I had slapped him :). Politely slapped him.

I enjoyed doing that, over the years I have perfected the art of telling people to f… off without saying it! All of that while smiling…. to add to the polite insult.

It is an art and whenever I see someone doing this in writing or in person, I am impress even if directed at me. I keep learning ways to perfect the art of telling people off in ways that leave them nowhere to go!

What would you have told that doctor? Did I over-react?

One thought on “Mama Bear”