Home » Life lesson » Which one was she?

Over the last 2 weeks, my husband, our daughter Emily and I traveled to New York City. For the first part of the trip, we played tourists and for the second part of the trip we attended the 5p- society yearly conference on Long Island.

Over the last 2 weeks, Emily played fashion model for me, I took over 800 pictures. 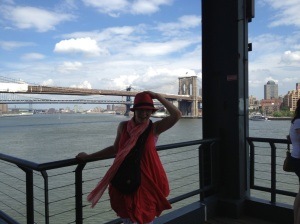 If you’ve read my blog before, you know that since Emily was diagnosed with Cri du chat syndrome, I have found reasons every year not to attend the conference.

We are all differents, we make decisions and have to live with the consequences.

Now that I have been to the conference, do I believe I should have gone before…?

I don’t think so!

I am sure Emily would have enjoy herself in previous years but Jon and I….? I’m not sure.

I am glad we waited.

I am also really glad the parents of the little ones there over the last weekend didn’t wait.

That makes no sense I am sure but let me explain.

I now know who my daughter is, I didn’t compare her to the other teenagers or young adult presents.  I looked for her in the little ones.

Was that wrong of me to do?

I do know that I saw part of her in multiple kids. And for those of you that were there… I didn’t recognized her in the little ones that were walking around…

I recognized her in the tiny 2 year old that were in their parents arms but were not holding on to their parents… Emily was that tiny 18-24 months old with no back muscles to help her sit straight. No grasp to hold something and no knowledge that she should have held-on to us when in our arms.

She was that tiny girl with her arms folded against herself and her hand on her a cheek, fingers in her mouth… drooling all over herself. 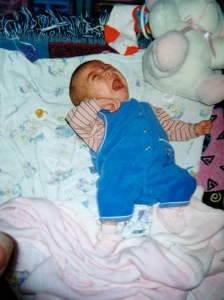 I don’t have many pictures of her looking that way, I always tried to set her up as if she was sitting by herself or as if she was holding her bottle…

It took us so long to have the doctors agree to do some tests… 15 months before we had a diagnosis.  During that time, my nephew who was 6 weeks older than Emily kept growing and learning new things while my baby achieved no milestone.

Those staged pictures helped me feel “normal”.  Most pictures showing how different Emily was didn’t survived… they were destroyed.

The picture below took us forever to take.  It showed Emily the way I saw her when in reality… she couldn’t sit on her own and didn’t sit up straight either.

Was I wrong to do that?

Maybe… but it felt right, it helped me get through the tough days.

So if you were at the conference and you saw me staring at your child… if you are the parent of one of the little walkers 🙂  I was admiring your child, admiring what early intervention has done for your family.

We had no therapies for the first 15 months as everything was “fine” with our daughter.

We learned from them, took notes and went home to work with Emily.  We lived away from family, we had no support or respite other than Monique…  our angel, Emily’s babysitter.

I made an excel spreadsheet of everything we needed to do and track during the day.  Emily had a binder following her to daycare.  Monique worked with Emily as much as she could during the day, documented all they did and we completed at night.

The following morning we started a new page.

A month later we took the binder back with us to meet OT and PT.

When she was old enough, we added speech.

Jon and I were “it” for Emily.  We still are although for the last 8 years or so, Jon’s parents have moved closer to us and Emily does have sleepovers there from time to time.

If you were at the conference and you saw me staring at your child who was that tiny little one… I was admiring a child who looks like my daughter did because I had never seen a child who looked like she did before.  At some point, I wanted to ask if I could hold your babies because it seemed unreal to me that your babies reminded me of my baby…

It was a relief to see them, I wanted to tell you that Emily was just like your baby but felt out of place doing so.  I didn’t want you to assume that her success and limitations would be similar for you as our kids are all differents.  I didn’t want to give you false hopes or make you wish your kids would do better than mine…

I should have just done it!

Maybe next time I will! 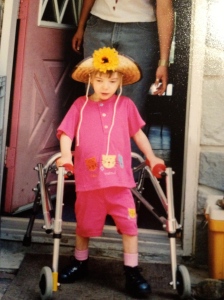 7 thoughts on “Which one was she?”