Emily is just over 4 years old and is included in a kindergarten class with a full-time specialized educator.  She is there for half days.

My morning routine now consists of dropping Emily at school, going to work, by lunch time, I grab my lunch, pick Emily up at school, eat in the car while driving her to the daycare across town and get back to work.

I eat lunch in my car and it’s ok!  The company is amazing!

The town is a 50 km/h speed limit, that day, Emily and I were singing our heads off and I forgot to slow down….. when I saw the police car, it was too late…. he saw me first.  I parked the car on the side of the road and waited!

That’s when it got interesting!

Emily loves police officers (she called them polite, couldn’t pronounce the soft c) she was beside herself….. full of excitement, she couldn’t believe how “lucky” we were that a police officer was coming to say hello!  LUCKY!!!

I raised her to believe that police officers are our friends, they are here to help us, they are the good guys!!!

Can you see where this is going?

The officer is now at my window and he is asking me if I know why he stopped me….

That time I said yes, I knew why and that I had no idea how I managed to miss the 50km/h sign as I drove there multiple times per day.  He seemed surprised that I admitted so willingly to my fault!

By now, Emily is bouncing in her car seat…. She can’t take it anymore…..  She is trying really hard to get the officer’s attention!

I had to help her!

I asked the police officer if he could look in the back seat and say hello to my little girl.  The look of surprise on his face was priceless, he was…. puzzled???  I had to explain to him that he is the good guy, that he is here to keep us safe and that because of that Emily wants to see him, see the uniform, the car, the lights, everything….  By now, he is smiling, he gets it!  I can’t say anything or argue because that would go against what I have been teaching my daughter.  He bent down, smiled and waved at Emily!  She had the biggest smile you can imagine!

He went back to his car and returned with a warning for me and a goodbye for Emily telling her to keep an eye on me!

A warning!  A was ready for the ticket, for the stern talk and I was going to take it like a mom who taught her child that the police officer is right…

Somehow that paid off!  Somehow, my daughter got me out of a ticket because I had to own up to what I was teaching her! 🙂

If you are going to do it, be willing to suffer the consequences… that was the lesson I learned that day!

3 thoughts on “Police officers are our friends!” 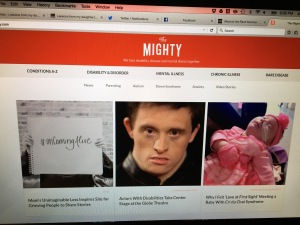